Councilman Eric T. Costello introduced legislation aimed at keeping cyclists safe. The bill does two key things: 1) it increases the penalty for blocking a bike lane with a motor vehicle; and 2) makes this a towable offense. 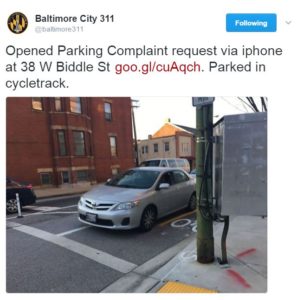 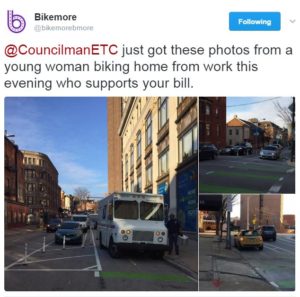 Bikemore, the premier cyclist advocacy group in Baltimore City has expressed their support for the legislation. You can learn more about Bikemore’s advocacy efforts on their Website, Twitter, or Facebook.

Costello noted that the City has made significant investments in cycle track infrastructure in the past couple years, citing over $7 million in capital projects. He said “if we are going to continue to make these types of investments, then we need to be serious about protecting them and not only the people on bikes that use them, but people walking and driving on streets with these investments as well.”

Specifically, City Council Bill 17-0019, Bike Lanes – Increased Parking Penalties is for the purpose of allowing for the towing of vehicles in properly marked and designated bike lanes; increasing the fine for parking or standing in a bike lane; and generally relating to bike lanes. The bill was referred to the City Council’s Judiciary and Legislative Investigations (JLI) Committee, which Costello chairs. He expects to hold a hearing on this bill in mid/late-March, 2017. Questions or concerns with the legislation should be directed to Costello (eric.costello@baltimorecity.gov) and JLI Staffmember, Marguerite Murray (Marguerite.Murray@baltimorecity.gov).

BE A PART OF THE DISCUSSION