IN PROGRESS- PLEASE CHECK BACK LATER

There has been an uptick in reports of BGE and energy company scams across Baltimore City. Please see the following press release from BGE and the Maryland Public Services Commission (PSC) outlining the nature of the scams including helpful tips on how to avoid being a victim: https://drive.google.com/file/d/18h048F_7co3MVgbJIZoBv7oJrsGu7cZF/view?usp=sharing

These scams can occur mainly through phone calls or home visits.

Mayor Brandon Scott issued a new Executive Order which goes into effect on Friday, December 11, at 5pm. Notable restrictions in the Executive Order include the following:

The full text of the executive order may be viewed here: Executive Order

The press release may be viewed here: https://content.govdelivery.com/accounts/MDBALT/bulletins/2b05a3e

https://www.costelloforbaltimore.com/wp-content/uploads/2019/09/NEW-LOGO.png 0 0 Eric Costello https://www.costelloforbaltimore.com/wp-content/uploads/2019/09/NEW-LOGO.png Eric Costello2020-12-09 15:38:352020-12-09 19:36:32Mayor Scott's Dec 09 Executive Order
UPDATE – STADIUM DISTRICT CAMERA EXPANSION PROJECT (impacting Federal Hill, Otterbein, Sharp Leadenhall, and South Baltimore)
BACKGROUND
Over the past four years community leaders in Federal Hill, Otterbein, and Sharp Leadenhall, led by Joe Levy, have been working with Senator Bill Ferguson, Councilman Eric Costello, Delegates Luke Clippinger, Brooke Lierman, and Robbyn Lewis, the Casino Local Development Council (LDC), the Mayor’s Office, Baltimore City Information Technology (BCIT), Baltimore Police Department (BPD), and large private property owners to install additional CitiWatch cameras in the Stadium District Area. The project was largely funded by casino impact aid, with the final total for Phase 1 in excess of $600,000. There were numerous challenges to get Phase 1 of this project to completion including ongoing community engagement from multiple neighborhoods, coordinating multiple city agencies, installation of 17 blocks of new underground fiber optic cable, construction of 10 new utility poles, and securing funding over multiple years from multiple sources. As these cameras go live, we will be working with BPD and other public safety agencies to assess the effectiveness of the cameras to both deter crime and assist law enforcement to hold wrongdoers accountable for illegal activity. While a set of fixed cameras is not a comprehensive solution to crime, this public safety project funded largely from casino impact dollars will add yet another tool to assist in our ongoing efforts to create neighborhoods where all members of the community feel safe. Without the hard work of Joe Levy, Ethan Cohen (Mayor’s Office), Stefan Waters (BCIT), and Major Sam Hood (BPD), We would not have been able to complete Phase 1 of this project.
RESULTS
The attached map illustrates locations for the Citiwatch cameras:
• Pre-existing Cameras (12 total) – Blue (these are Citiwatch cameras which were operational prior to this project)
• Phase 1 Cameras (12 total) – Green (these are Citiwatch cameras part of this project, which started going on-line in Fall 2020 and will all be operational by November 2020)
• Phase 2 Cameras (10 total) – Yellow (these are proposed locations of Citiwatch cameras for this project, which were proposed at the beginning of the project — locations are still TBD and are subject to additional funding)
NEXT STEPS
We will continue to work with the Mayor’s Office, BCIT, and BPD to analyze data to determine future locations. In addition, we will make best efforts to secure additional funding to help realize Phase 2 implementation. It is important to note that any future funding is contingent on a variety of factors. There is no expected timeframe that can be shared at this time. 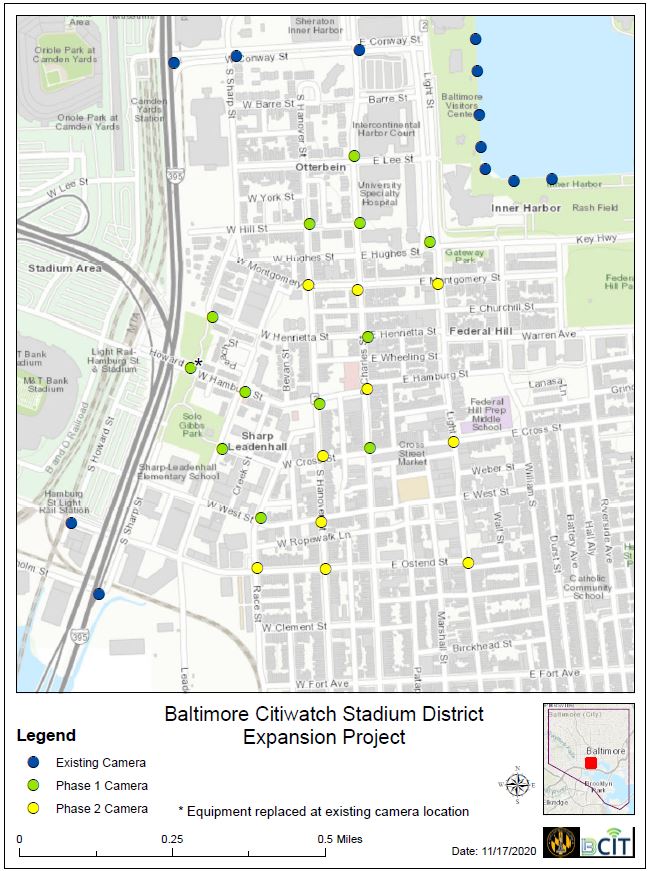